ABSTRACT
The social illness has become main problem in Indonesia such as drug addiction, prostitution, sexual deviation, game addiction, and so on. Based on Indonesian government, through its anti-drug agency, the National Narcotics Board (BNN) in 2015 the number of drug users are 5 million people. Drugs have caused for as many as 15,000 deaths each year in Indonesia. Peoples did not get information about social ills such as the types of drugs that have the same characteristics. As a largest Muslim country in the world may be reduce the social ills with the Islam approach. Recently, the integration of Islamic science and technology has become popular. At times the people get obstacles to get information and advice directly from expert and scholars in Islamic science. This paper is to develop a prototype expert system by providing prevention and best treatment based on Quran and Hadith. We use some of the data for knowledge base obtained from Selat Panjang, Riau. Based on the preliminary results, it has similar diagnoses with expert. A prototype expert system using Bayesian Network has been potentially to be used and capability for early diagnosing and educating the peoples in social ills cases based on Quran, Hadith and advice of experts, but still has plenty room for improvement.
Keywords: Bayesian Network; Expert System; Social Illness 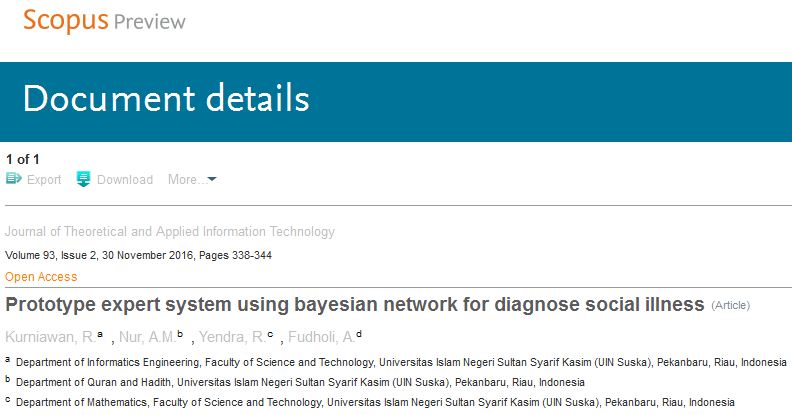